Beautiful and very passionate Ariel, how far do her limits go…

Many of you like to watch movies with boars, but none of you has seen a movie like this before. This is the first movie that was filmed with two very dangerous boars, Rocco & Tommy, a dog Lucky and beautiful Ariel.

Sex with a boar is not easy as some of you might think. It’s a dangerous beast, very strong and very aggressive if he feels the desire for sex. When the boar turned on, sex is going at a pace that he sets. Nothing else can restrain or calm him, until he empties his balls and feels relief. That’s exactly what excites Ariel. That aggressive desire for sex, which the boar shows, and her need to be satisfied in a true animal way.

Ariel specifically wanted the camera to keep rolling in moments of going from one animal to another. She wanted to show her life with two boars and a dog. In the video, you’ll notice that there is a third boar. Unfortunately, he never showed a desire for sex.

When she entered the place where the first boar was, there wasn’t much foreplay. He immediately began to circle around her, showing her that it was his place and that he was in charge. Soon after, as soon as he felt the scent of her pussy, he immediately humped her. He searched for that warm spot, where he would put his dick. As soon as he found it, he slid inside and immediately began to empty his balls. Soon after, he was out of her, but he humped her again, and then his body found the right position. His sperm ran down her pussy, and drops of sperm glistened on her thighs… He twirled his dick, stuffing Ariel as much as he could, while she was wiggling her ass, enjoying the satisfaction she felt. After the sex, she squeezed the sperm out of her pussy on a small cushion and gave it to the other boar to smell it…

The other boar watched the entire first sex and he didn’t need the cushion filled with sperm. His nose already smelled the sense of the first sex and he couldn’t wait for Ariel to come to him. His desire for sex was so great that Ariel could hardly put her body in the right position. He was running around her and she was struggling not to be thrown down to the floor. When Ariel managed to put her body in the right position, he kept humping her relentlessly. He tried to conquer her several times, since his excitement was greater than normal behavior. His dick was going in and out of her several times, until he finally settled down and let his sperm flow into her hot pussy that was already full. And so on until the end… After the sex, he lay down beside her and rested, while she was squeezing out the remainder of sperm. The amount of sperm that Ariel received was exactly what she wanted. She wanted her pussy to be all sticky and white…

The whole thing didn’t end there, because her two dogs waited for her outside. Two gentlemen and two dangerous guards. In the world of dogs, the dominant one always has the opportunity to mate, while the weaker one is learning. Ariel slowly walked under a tree and started the third game there. She wanted canine sperm to be the last sperm that entered into her. She positioned her pussy and let him fuck her. His knot got stuck in her, while in the depths of her pussy, the tip of his dick was spraying and filling her beautiful body…

This is the first movie that was shot entirely with two boars and a dog at the same time. As I’ve said, the camera kept rolling at the transition from one animal to another.

Keep in mind that both boars weigh around 160-170 kg (350-375 lbs.), that they are immensely strong and have very dangerous hooves on their feet. They can cause serious injuries, because, like I’ve said, Ariel loves only natural sex, without additional aids.

I’d like to thank Riel for her desire, hard work and courage. 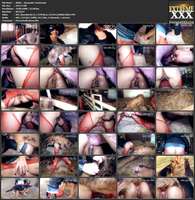