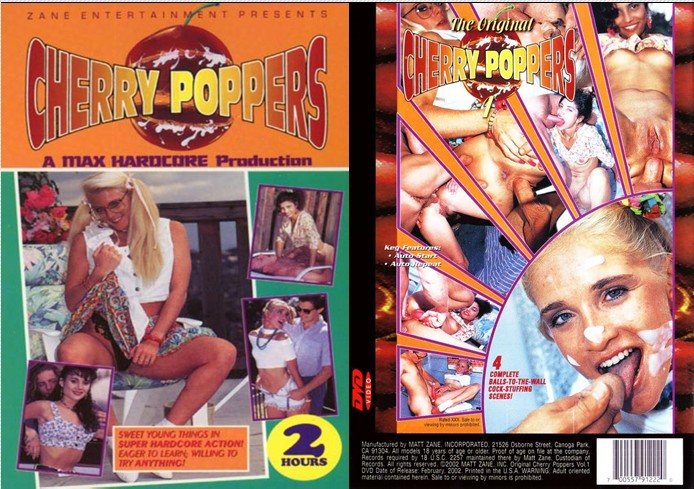 Opening up the first edition of the series is the always nasty Tammi Ann. This Max favorite is always up for some hard and hot fun.

This time, she sits around reading porno mags and playing with herself until the owner of the home returns. Now, having seen this set up at least an dozen times in other Cherry Poppers vids, it’s not that original, however, I must admit it has to be every man’s fantasy to come home and find a hot young girl fingering her pussy. “Honey, I’m home” !!
Instead of Max, it is Tim Lake who gets to play with cute little Tammi. I think this is one of the reasons I like this scene. Tim is far less annoying on screen than Max is. There is more build up here. Where Max would go straight for choking Tammi and stretching out her ass hole, Tim takes his time and enjoys it. The result is a much more watchable and infinitely more erotic piece of work. There are some great close ups of Tammi’s face as she blow Tim. Also, and this might be the clincher, the dialog in this scene is typically nasty. The difference however, is that it is Tammi Ann who is spouting the awesome words of lust, rather than Max berating his costar. Instead of being distracted by the dialog, I was actually turned on by it. Overall a great scene with some good, condom covered anal and a fantastic facial. Tim even gets in his work out as he does push ups while getting head to end the scene. A great piece of work by Lake, Tammi Ann and Max as director.
Unfortunately, Max does not stay behind the camera. He appears in the next scene with a beautiful blonde, Destini Lane. The set up is common Cherry Popper fodder. Good old Uncle Max is helping her study. Desitni is a bright eyes cutie who never really caught on, much to our disadvantage. She is a fine looking woman. Too bad she is wasted in this scene. After dressing the plain Jane up like a slut, Max runs her through his usual high impact sexual work out. If this is your cup of tea, you’ll love it, but to be honest, I’m bored with it all. Destini looks much less than enthused by Max’s probing, and seemed genuinely disinterested during this scene. (Honestly, though, can you blame her? What woman, in her right mind would want to fuck Max?) At least the facial at the end is moderately entertaining.
Scene three is automatically a step up as Max is once again not to be seen. Alex Sanders pairs up with lovely brunette Veronica. He pulls the old, ‘Out of gas’ trick on her to get her out of the car. This outdoor pairing has a lot of set up and Veronica takes a lot of convincing along the way. This is a much more convincing de-virginization scene and is not full of borderline underage innuendo like so many later CP scenes. Overall a great scene, with some outstanding shots of Veronica with her cute ass way up high while Alex fucks her. Go back to this shot more Max, it is a thing of beauty. Great stuff, including a dripping, asshole cum shot.
Max is back for the final scene in this volume. This time, he is paired with Adriani, an ultra thin Latina in tight cut offs with a pretty shaved pussy. She is not all that attractive, but it is once again, Max who fucks up this scene. His lame, abusive dialog gets in the way of what could have been some good oral sex shots. Later, her nearly fists the poor girl in ass, bringing a rather pained expression to her face. There are, however some nice edge of the pool fucking shots, with Adriani screaming out some hot dialog. The whole scene is just better when Max shuts the fuck up. Look for some one man DP, and even some double anal with a big, pink dildo.
Overall, there are some good things about Cherry Poppers and some bad things. My personal souring on a lot of Max’s on screen antics may bring down the overall rating on this video, so if you just love Max, add a few points for that. Later versions of this series are much better, but this one is worth a look, for Tammi Ann and Veronica if nothing else.