It is time for a new Kitty treat. September has kicked in, Summer holidays are over and a new season of petlove movies firestarts!Season that opens up with the return of petlover rookie KittyK9,

who has just about debuted no longer than a month and a half ago, but is already cherished and raved by a juicy collective in here! ;)She is obviously not alone in doing the opening ceremony, she is sided by a small but rather energetic partner whose performances we have already had the chance to appreciate.

He is notoriously a cheerful one and we will see him hopping around and also ONTO Kitty as she unveils and works out her delicate womanhood to fuel our overdriven hero’s libido with!

Petiquette suggests that it is not well-mannered of a lady to have a zealous hound waiting, and Kitty is one who takes petlove on a dead-serious level! So, she gets on her fours and prepares to be the end of his enthusiastic thrusts.

His enthusiasm, though, has him beating around the bush for a while until he eventually settles in, but still misses the knot bonus! Regardless of that, Kitty demonstrates to be one well-mannered lady until the end and rewards him with her very first oral action segment ever! 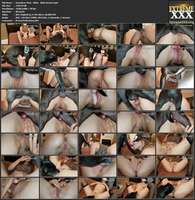