Yasmin and Ariel had a meeting again. Every time the two of them meet, they spend the day and evening telling each other stories about experiences from their private lives. They love such stories and enjoy them very much. Such conversations turn them on, because they know that the next day they’ll have a session with their lovers that know how to satisfy them in a special way. The following day began in this way…

While preparing for the recording, putting on make-up and clothes, they agreed who would have sex with which boar. After they made a decision, they headed towards the sty, where two boars that were ready for sex waited for them. Ariel entered first the space where Tommy lived. This space, as well as the other two, were marked by the scent of boar sperm many times. This is the place where Ariel fulfills her fantasies, every time she wants.

When she opened the door, Tommy immediately knew what to do. He waited for Ariel to put her body in the right position and as soon as she did it, he violently humped her, trying to stick his dick as soon as possible. Ariel loves to feel his strength on herself. She loves it when she feels that the boar is taking advantage of her and enjoying her body. His dick slapped her pussy and slid over it. As if he waited for Ariel to help him and direct his dick to the right place…

He got close to her body and let his cock slide into her. It was like that until he took the right position and his long dick twisted itself entirely into her pussy. He was deep inside her and swirled while spraying the inside of her stomach. Drops of his sperm ran down her clit and her fingers. The whole scene is beautiful and full of sexual aggression and pleasure that Ariel felt.

She rubbed her clitoris until Tommy emptied his entire load, so that there was no longer room in her stomach. The sperm started to emerge out of her pussy forcefully, while Ariel was having an orgasm. I believe she felt great satisfaction as she was emptying her pussy from this enormous amount of sperm… After Tommy pulled out his dick, she remained in that position, allowing her pussy to release all the remaining sperm…

Yasmin watched it all. She enjoyed watching her friend. Yasmin’s pussy was already wet. Her juices were lubricating her juicy pussy, which was preparing to satisfy the other boar. The boar Rocco can be very unpleasant if he feels the scent of sex. He also observed the sex that was happening before him. He was absorbing all those scents, wildly waiting for his turn. Yasmin knew what awaited her, since Rocco was too aroused. As soon as the support for her body was placed, Rocco immediately humped it with his dick erect. As soon as Yasmin managed to position her body on the support, boar immediately humped her. He tried to shove his dick in violently, finding his place right away.

Yasmin felt his thrusts and his dick getting deep inside her. He was so aroused that he fell out of her, but in a couple of seconds, he pushed it back into her already marked pussy. He fucked her like the sex would last forever. She moaned, enjoying this beautiful act. Yasmin enjoys such rough sex that only a boar can give her. She likes to feel that she is being abused and satisfied in the right way. His balls were being emptied into her pussy and Yasmin let him do everything to the end, like a true boar…

I want to thank the two beautiful models who know how to enjoy their lives. Every type of animal sex has its advantages. The pleasure of sex with a dog is in his knot. Many women like to feel it inside them. It’s somewhat different with the boar. Such sex is much more aggressive and serious. Boars have a much larger amount of sperm than humans. 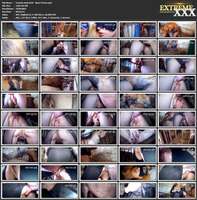